July 06, 2020
Source - TOI
WASHINGTON: The United States is flexing its military muscle at China on behalf of India and other Asian allies and partners, amid signs that Washington is finally ready to take some punitive action against Beijing for its role in spreading the coronavirus pandemic around the globe.In the clearest sign yet that the Trump White House will not back down from its position as a pre-eminent power in the Pacific and beyond, Trump’s chief of staff Mark Meadows told Fox News on Monday that the US military "will continue to stand strong whether it's in relationship to a conflict between India and China or anywhere else." 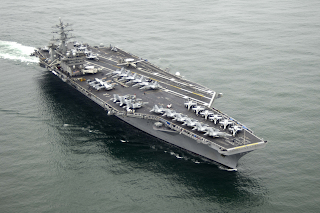 Soon after Meadow’s remarks, President Trump cryptically tweeted "China has caused great damage to the United States and the rest of the World!"

China has caused great damage to the United States and the rest of the World!

Meadow’s remarks came even as Beijing and New Delhi appeared to stand down from their border claims, about which the US had not offered any reaction yet although officials had previously expressed hope that the matter would be settled peacefully.
But reference to its military primacy in the region in the context of the India-China stand-off came even as two US Navy aircraft carriers steamed into the South China Sea in a show of force that some Chinese nationalists found unpalatable.
"The South China Sea is fully within the grasp of the Chinese People's Liberation Army (PLA), and any US aircraft carrier movement in the region is solely at the pleasure of the PLA, which has a wide selection of anti-aircraft carrier weapons like the DF-21D and DF-26 'aircraft carrier killer' missiles," the Global Times, mouthpiece of China’s authoritarian government said on Monday, quoting unnamed Chinese analysts.There was a swift riposte from the US. "And yet, there they are. Two @USNavy aircraft carriers operating in the international waters of the South China Sea. #USSNimitz & #USSRonaldReagan are not intimidated" a US Navy spokesman tweeted with the hashtag #AtOurDiscretion in response to the Chinese threat.

Trump has lately stepped up verbal attacks on China after months of trying to reach a trade deal with Beijing aimed at selling more farm products from agricultural states in the Middle America that form the bedrock of his political support, only to be undercut by the coronavirus. The President and his aides now seem convinced that China deliberately exported the coronavirus to undermine the US and world economy even as it initiated a border conflict with India.Over the weekend, Trump’s top trade advisor Peter Navarro bluntly accused China of deliberately letting out the virus. "What they deliberately did – and this is beyond reproach in terms of the facts – they deliberately allowed Chinese nationals to come into the US, Italy and everywhere in between, who were infected, while they were locking down their own transportation network," he said.The messages from Navarro and Meadows came on the heels of Trump’s own June 30 tweet expressing anger at Beijing: “As I watch the Pandemic spread its ugly face all across the world, including the tremendous damage it has done to the USA, I become more and more angry at China. People can see it, and I can feel it!”

As I watch the Pandemic spread its ugly face all across the world, including the tremendous damage it has done to t…

US officials, analysts and lawmakers also believe China is clearly the aggressor and initiated the ongoing border spat with India. More than a dozen prominent US lawmakers, including Senate Majority leader Mitch McConnell, have blamed China for instigating the clash with intent to grab territory. One US Senator Tom Cotton, considered close to Trump, said China "essentially invaded India and killed 20 soldiers."